So back in 2016, I was watching a journalist interview, someone, I consider a progenitor, I actually refer to him as Grandpa, Yes I’m sure you know him, the very Bishop T D Jakes. And this journalist asked him a question I’ll never forget, not because of the question itself but because of his response. I’ll paraphrase the question, ‘Bishop, what do you want to be remembered for?’ and his response was like, “I’m a Pastor, CEO, Author, Movie Producer, Songwriter, Talk show host, father, etc… but I’ll love to be remembered as a friend. Long after I’m gone, someone grabs a copy of my book to read, Or listen to messages I preached, gets into my thoughts and finds answers to his questions and guidance for his confusion”. (It’s a shame I can’t find that interview on Facebook anymore but nevertheless let’s talk)

I was shocked, for someone with such a Profile such as his to desire a legacy of Friendship, it got me thinking about what friendship is, what kind of a friend I am and what the kind I want to be. This interview would revolutionize the way I see friendship.

Merriam-Webster dictionary defines a friend as “a person who you like and enjoy being with”. In as much as this definition holds true, I won’t limit myself to it. I enjoy redefining things; to me ‘A friend is someone who loves another Loyally, intentionally and unreservedly. 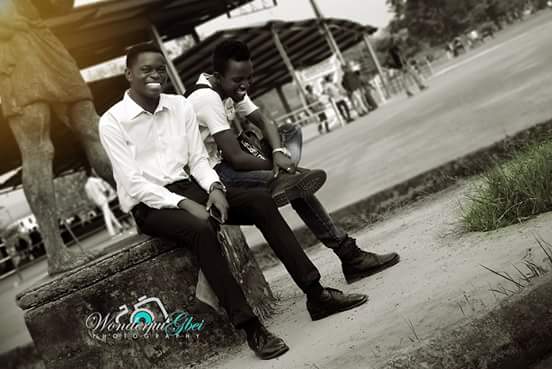 Being a friend is tough
I know the bad news is usually served last but I’ll upset that status quo too. Being a friend has been reduced to meaning always smiling at someone and being in their good books regardless of what you know to be true, we’re becoming a generation of people pleasers who can’t tell someone the truth for what it is. So we have a lot of people purchasing forms and auditioning for Talent shows they never had the talent for because friends didn’t tell them to their face that ‘Singing wasn’t their thing’, or ‘ This Dance thing ain’t yours’, and they have to face the truth in a way that demoralises them for want of the counsel of a true friend. Sycophancy and Support have more than a thin line separating them, a true friend knows that boundary.
Being a friend, a true friend means loving someone so much to tell them to stop wasting their times on things that aren’t good at.

Being a friend means ‘being in on the plan’
There is a reason God referred to Abraham as a friend, It’s the same reason he referred to his conversation with Moses as that of ‘friend with friend’, needless to say, it’s for the same Jesus called His disciples friends, instead of servants. It’s because friends are aware of the plan, believe in the plan and put in their effort to make sure the plan on ‘paper’ becomes a reality. Friendship can be a great path to fulfilment in life, not because it’s the aim of friendship but because being a friend, and having good friends can take you to where you’re supposed to be in a hurry. Choose your friends wisely and feel free to share ‘The plan’ with them. I know there is a lot of treachery going around but remember that the envy of Joseph’s brothers was part of God’s plan. Ask your friends about their plans, Share yours too. Sharing a vision, and being held accountable by trusted friends can be the difference you between staying on course and you deviating from the goal.

Friendship should be reciprocated
People weary a lot, and faster from ventures which come with no reward. In being a friend, sometimes take inventory. Some soils aren’t worthy of your seeds anymore; Know when it’s time to move on or just shift a little. Don’t do good with the aim of receiving good, at that point it stops being a good deed and becomes a transaction; nevertheless, you’re a limited resource. It’s not a wrong decision to keep one-sided, ‘barren’ friendships at an arm’s length.

Friendship has its rewards
I know its unusual to bring the best towards the end, but you should know by now that I’m unusual. Whether you’re expecting it or not, Being a good friend has benefits. Some I can remember, because I’ve experienced them first hand include being loved, vouched for in my absence, being trusted with life long secrets, being acknowledged in write-ups (academic and otherwise), being looked up to as a good example of a good friend, Gifts in cash and kind, loyalty, recommendations, the list is almost endless. Don’t be a good friend because of these things but seeds of friendship with time, yield these fruits and so much more.

Being a friend is a Choice
I know you’ve heard that you should choose your friends and not let your friends choose you. I want to alter that, Choose and allow yourself to be chosen, Some of the strongest friendships I have that spur, Inspire and motivate me were the ones I was chosen. Don’t misunderstand me, If a friendship is getting toxic put it in the trash or at least throw it out the window but you won’t always know good people by their smile or a beautiful face neither would you know bad people from the frown or a scar. Sometimes Destiny attracts people you’ll need to you that don’t look like it, don’t send them away.

I want to remind you that it’s still ok to call someone an acquaintance because the word “friend” comes with so much responsibility that it shouldn’t be joked with.

In conclusion, remember he who would have a friend must show himself friendly.
I hope with this few points of mine I’ve been able to convince you that the best kind of friend to be is a good friend. Not just because you’ll need one, be a good friend just because.

With all of the Father’s Love.

All photos by WonderfulGbei photography

3 thoughts on “A Friend”